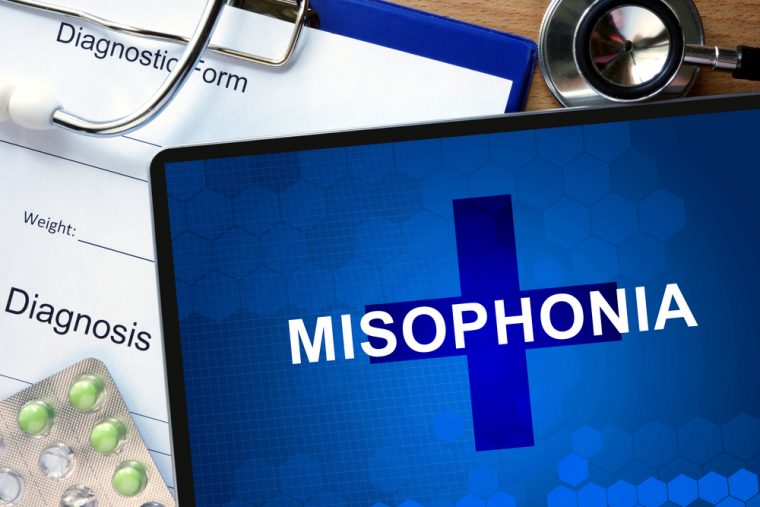 Misophonia is a neurological disorder. It can also be called “selective sound sensitivity syndrome“, which is abbreviated as SSSS or 4S. This disorder often begins in childhood, with many sufferers reporting that they began experiencing symptoms between the ages of ten and twelve.

Misophonia is a fairly recently recognised disorder. It was first defined and named by two US neuroscientists – Pawel J. Jastreboff and Margaret M. Jastreboff – in 2001. The word “misophonia” can be split into “miso” which means “hate” in Greek and “phonia” meaning “sound.”

Misophonia is a type of decreased sound tolerance (DST). However, adults and children who are diagnosed with this disorder are only sensitive to certain loud or quiet sounds and they react normally to other sounds.

Typical sounds that misophonia sufferers are sensitive to often involve other people. They include the noise of other people walking, tapping their feet, eating, snoring, sneezing or breathing loudly through their mouths. They may also be sensitive to repetitive sounds or the sound of certain consonants.

When a person suffering from misophonia hears a sound that they are sensitive to, they react quickly and strongly. They may become very annoyed or even enraged. They may experience a “fight or flight” reaction in which they either want to hurt the person making the sound or escape from the area in which the sound is being made.

People making the noises to which misophonia sufferers are sensitive may in turn react badly to the sufferer’s reaction to them. They may become angry or ridicule the person who does not like the noise. They may even exaggerate the noise to annoy the sufferer even more.

This sensitivity to certain everyday noises caused by others may cause some people diagnosed with misophonia to avoid social interaction and to become isolated. Patients may lose their jobs or experience relationship break-ups because of their condition. As a result, they may even contemplate suicide as their condition seems to be the cause of all these problems.

Misophonia differs from hyperacusis in that sufferers are only intolerant of certain sounds, while hyperacusis patients are over-sensitive to normal, environmental sounds, such as doors closing, clocks ticking and phones ringing. These sounds seem extremely loud to hyperacusis patients but not to other people.

However, misophonia and hyperacusis can occur together, with many patients reporting symptoms of both conditions.

According to several studies, misophonia is fairly common amongst sufferers of tinnitus. Tinnitus patients perceive ringing or other sounds in their ears, although these are not audible sounds and cannot be heard by others. Research carried out in 2000 amongst Pawel and Margaret Jastreboff’s patients concluded that around 60 percent of tinnitus sufferers also had some form of DST.

Tinnitus retraining therapy (TRT) is a recommended treatment for misophonia. Other treatments include habituation therapy using broadband sound generators, hypnosis, Cognitive Behavioral Therapy (CBT) and the use of colored noise, although some therapists believe that the latter treatment can make misophonia worse.

Further research needs to be carried out to discover whether the existing treatments lead to long-term improvements. Although there is no recognised cure for misophonia at the moment, research projects into the condition are being carried out. They may lead to better treatment methods and possibly a cure in the future.

Coping skills can help patients to live with misophonia. They may include talking about the condition to the people closest to the sufferer. This may lead to such actions as allowing the misophonia patient to miss family mealtimes. Another coping strategy is to disguise the sounds to which the patient is sensitive with music.

If you believe that you are suffering from misophonia, you can contact us for a referral to an audiologist with knowledge of the condition.

If you are diagnosed with misophonia, the good news is that there are several ways in which you can begin to deal with the condition. These include joining an online or offline support group, using coping skills, and receiving treatment. All of these aspects of dealing with misophonia will help you to feel supported and, in time, they may lead to improvements in the condition.

Talk to us about Hearing...